[Edit: There a many ways that a veteran recruiter who has nurtured nearly 10,000 relationships in almost 3 decades can better position you for career growth in your chosen field.  This is particularly true when that recruiter is certified, educated, and a former practitioner in the same career field.  Borrow their network!]

Based on reports from different applicant tracking systems, it took 20 million job applications to hire 200 thousand people. That’s one in one hundred or 1%. For those who applied directly it was much worse, about one hire for every 160 applications. It was much better if a recruiter contacted you via LinkedIn or found your resume. In this case the chance of getting hired was 20 to one. The best odds for getting a job was via a referral. In this case your chances were about 10 to one. 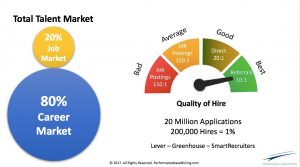 While the odds clearly favor being found (aka, direct sourced) or being referred, there’s much more to the story. In these cases, the jobs were much better, too. The reason is obvious: When a company contacts you about an opportunity, the job being offered needs to be better than the one you already have or else you wouldn’t be interested. In this case the company is the seller and you’re the buyer. And the buyer always has an advantage.

As important, the on-the-job performance of the people hired via the direct sourced and referral process is superior to those hired via the application process. This reason is obvious, too. There is more time spent ensuring there is strong fit between the company and the candidate.

When you apply directly, the job is ill-defined, the selection criteria is typically a laundry list of “must have” skills and experiences, and the compensation is negotiated as the criteria for having a conversation. Worse, to even get to the compensation discussion you must jump through a bunch of hoops to validate your skills and experiences. Sadly, candidates will do this to meet some low order Maslow need (i.e., basic economic well-being). Under these conditions the likelihood of the job being a great career move is problematic. In this case the company is the buyer and the candidate is the seller. And the buyer always has the advantage, especially when the demand for their product (the open job) is greater then the supply (150-200 applicants for every opening).

Yet this advantage is wasted by the company by not focusing on criteria that best predicts fit and performance. But you get what you pay for. This is what happens when companies allow everybody to apply to their job openings without any effort.

Given this situation, here’s how you can turn the odds to your favor and get a better job in the process:

Rather than wasting your time applying to every job available and hoping for the best, it’s best to stop hoping. Instead, find jobs and companies that meet your career needs and then work like heck trying to make some acquaintances there. It won’t take any more time, and more important, this is time well spent.

Lou Adler (@LouA) is the CEO of The Adler Group, a consulting and training firm helping companies implement Performance-based Hiring. He’s also a regular columnist for Inc. Magazine, SHRM and BusinessInsider. His new Performance-based Hiring micro-course is now available on Lynda.com. His latest book, The Essential Guide for Hiring & Getting Hired (Workbench, 2013) is now being published in Korea and Japan. It provides hands-on advice for job-seekers, hiring managers and recruiters on how to find the best job and hire the best people.

Ask this One Question to Eliminate 50% of All Hiring Mistakes
After 2017 – Decade Demise of the ‘Headhunter’?